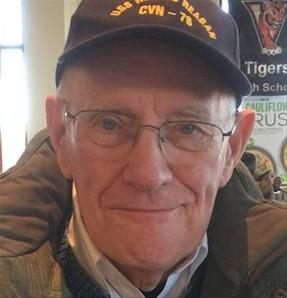 Charles “Chuck” Weir of Grimes, Iowa passed peacefully from this Earth on September 28,

Chuck was born on October 18, 1928, in Bloomington, Illinois, and was raised outside of

Morrison, Illinois, in a farmhouse that had no electricity. He helped farm the land using horses.

In his childhood, Chuck was called Gene, after his middle name, Eugene.

Chuck was a lifelong football fan. In high school, he was a star quarterback of the Morrison

Mustangs. He also played college football at the University of Dubuque and Northern Illinois

University, where he earned a BS in Education. Later in life he was a dedicated Iowa Hawkeye

Chuck was a veteran. He was proud of his service in the U.S. Marines. He went to boot camp in

Parris Island, South Carolina and became a Drill Sergeant. While in the Marines, he sailed on

the USS Coral Sea which took him to locations around the world, including Gibraltar and Cuba.

Later he spent 9 months as an embassy guard in Reykjavik, Iceland. He had a great

appreciation of that country. If you asked Chuck the temperature outside, he would look at his

phone and tell you, then he might also tell you the temperature in Reykjavik.

In college Chuck met Diane Weir (née Stephenson), who he married. Together they moved to

Morrison, Illinois where Diane and Chuck had two children, Karen and Robert. The family then

During Chuck’s work life, he was a salesman for insurance, printing, and envelope companies.

He was VP of Quality Control at Midcentral Plastics in West Des Moines, and at retirement age,

continued working part-time at several local businesses, including The Woodsmith Store and

Cigna. His last employer was Wal-Mart near his home in Grimes, where he worked until he was

91 years old. As a greeter, he made hundreds of friends, young and old. He had a smile for

everyone who walked through the door.

His great-grandchild, Calvin Jimerson, was born this year.

He is preceded in death by his mother Ella Mae Pyse, his father Foster Charles Weir, and his