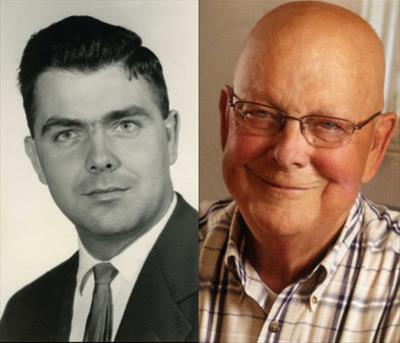 The strong, calm man is always loved and revered.  He is like a shade-giving tree in a thirsty land, or a sheltering rock in a storm.  “Who does not love a tranquil heart, a sweet-tempered, balanced life? It does not matter whether it rains or shines or what changes come to those possessing these blessings, for they are always sweet, serene, and calm.  That exquisite poise of character which we call serenity is the last lesson of culture; it is the flowering of life, the fruitage of the soul. It is precious as wisdom, more to be desired than gold – yea, than even fine gold.  How insignificant mere money-seeking looks in comparison with a serene life – a life that dwells in the ocean of Truth, beneath the waves, beyond the reach of tempests, in the Eternal Calm!


Herbert Otis Hoover was born to Virginia Evelyn Gritten Hoover and Herbert Ovid Hoover on November 18, 1938.  He was born near Ayrshire, Iowa in the same farmhouse where his father was born. Herb described himself as a farm boy who had “dirt in his blood”.  He began his formal education in a one room schoolhouse, in Clay County, Iowa.  Herb graduated from Spencer High School in 1956.  He was active in Future Farmers of America.  Herb was elected State Secretary for 1955 – 1956 and then served as State President of FFA in 1956 – 1957.

With the assistance of the ROTC, he continued his education at Iowa State University.  Herb was a member of Phi Kappa Tau Fraternity while he attended Iowa State University. While earning his bachelor’s degree he also obtained his private pilot’s license.  Herb went on to earn an instrument rating. He flew for 50 years. In 1960, he graduated with a BS in Vocational Agriculture Education.  At the same time, the United States’ Army commissioned him as a second Lieutenant and he served in that position for two years.  Herb was stationed in Hohenfels Germany as part of a missile defense battalion.  Herb married Martha Lou White on August 9, 1959.  Herb and Martha shared nearly 61 years.  During that time, they brought Fae Ellen and Elizabeth Ann into the world. He was immensely proud of Fae and Lizz.

After teaching Vocational Agriculture for three years, Herb accepted a position as a salesman with Geigy Chemical Corporation and the Hoovers moved to Marion, Iowa. Herb served on the Linn County Soil Conservation Board.  After 5 years with Geigy, Herb formed Control Services Inc. For the next 40 years, he was the chief, cook and bottlewasher for CSI.

Ian David Hoover-Grinde and Emma Elizabeth Hoover-Grinde brought joy and pride to their “Pa”.  He thoroughly enjoyed every moment with his grandchildren. Herb is survived by Martha, Fae Ellen, Elizabeth Ann, David Grinde (forever son-in-law) Ian Hoover-Grinde, Emma Hoover-Grinde, his siblings Sherry (Bud) Mutterer, Dennis (Lu) Hoover, sisters in law: Marilyn White and Patricia Hossack as well as many cousins, nieces and nephews.  Herb was preceded in death by his parents, two infant nephews and brothers and sisters in law.

He loved to travel.  Herb and Martha traveled extensively in the United States, his passion for genealogy inspired many trips to cemeteries.  The couple traveled to several Central American countries, Brazil, Sweden, Australia, New Zealand, Europe and Canada.  Loving to fish, he enjoyed angling with good friends and family in Minnesota, Wisconsin, Michigan, Canada and Alaska.

Many friends and family members enjoy beautiful furniture he built in his woodshop.  Refusing to take money for anything he built, he gave away his creations.

On July 1, 2020 Herbert ended his journey gently and with dignity in the presence of his family in the home that he built.  He was well loved and will be greatly missed.