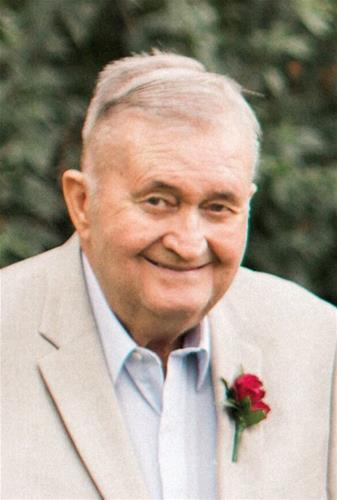 Jerry was born at home on April 2, 1934, Renwick, IA. to William H. Helmke and Hilda (Boge) Helmke. Jerry was the 5th of six children. Growing up, Jerry worked on the family farm, loved riding horses and was involved in 4-H. He was a four year letter winner in sports. He graduated from Renwick High School in 1952 and worked at Gilmer Creamery Eagle Grove, Renwick Chevrolet and Renwick Creamery. The Helmke farm was the first to receive electricity in Wright County.

On May 26, 1957, Jerry was united in marriage to Mardelle Joyce Larson. They lived in Renwick until they moved to Humboldt in 1959, where they raised five children. He started working for REC in 1957 and worked there until he retired in April 1996 as a foreman.

Jerry enjoyed singing in a harmony Barbershop Quartet. He pitched on a slow pitch softball team, enjoyed snowmobiling and motorcycling. Jerry was an avid hunter and fisherman. Jerry roasted whole hogs and enjoyed roasting for weddings, parties and fundraisers. He spent many years golfing in the men’s league at Humboldt Country Club. Summers were spent at Twin Lakes with family and friends and winters were spent in Weslaco, TX. with his wife Mardelle. He enjoyed spending time with family.

Per Jerry’s wishes his body has been cremated. A private family service will be held at a later date.