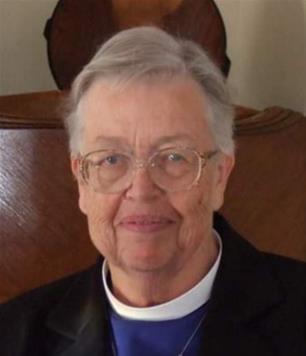 The Reverend Sallie Verrette, 89, passed away on Epiphany, Thursday, January 6, 2022, at the Mayflower Community in Grinnell, Iowa.

Born in El Paso, Texas, in 1932 to John and Enid (Morgan) Cheavens, she lived in Samne, Peru, until she was eight years old. Her father was a metallurgical engineer, and the family followed his work, living in Arizona, California, Nevada, Texas, and Washington. Sallie received her high school diploma from Stadium High in Tacoma, Washington, in 1950 and graduated summa cum laude from Willamette University with a B.A. in French in 1954. She was awarded a Fulbright Scholarship and spent the 1954-55 academic year in Dijon, France, before enrolling in graduate school at the University of California, Berkeley, to study for a doctorate in French.

It was there that she met Victor Verrette, a fellow teaching assistant. They married in 1956. After two years at the University of Montana in Missoula, Vic and Sallie moved to Grinnell in 1961. Sallie raised her children, worked as an occasional lecturer of French at Grinnell College (1962-1973), and volunteered in the community, including serving as President of the League of Women Voters. Following a year in Paris for her husband’s sabbatical, she directed the Grinnell Community Daycare Center from 1977-1980. Inspired to study social work at the University of Iowa, she earned her Master of Social Work degree in 1982. As a school social worker for Heartland Area Education Agency in Newton between 1982 and 1994, she was dedicated to helping children and families and worked to advance her profession as a founding editor of the Iowa Journal of School Social Work.

Sallie loved to travel, and it was while on an extensive trip through Europe with Victor that she was called to serve God, during a visit to the American Cathedral in Paris. Through the process of discernment, she committed to fulfilling her calling. Sallie was ordained as an Episcopal priest in 2007 and received certification as a spiritual director from the Souljourners program of the Benedictine Sisters, Mt. St. Scholastica in Atchison, Kansas. She served as a priest associate at St. Paul’s Episcopal Church in Grinnell, contributing her love, wisdom, and faith to the church and parishioners.

Sallie moved to the Mayflower Community in 2016.

It is impossible to sum up Sallie’s life in this space. In her many roles–mother, wife, friend, teacher, daycare center director, social worker, and priest–Sallie touched countless lives. She served as an advocate, shared her wisdom, provided comfort and inspiration, and made our lives better for having known her.

Preceded in death by Victor, her husband of sixty years, in 2016, she leaves behind her children Charlena Verrette, Claire Mathias (David), and Paul Verrette (Carol Hinz), and grandsons Joseph Mathias, Oliver Verrette, and Matthew Verrette. Her sister Enid Schantz preceded her in death in August 2011.

Her family would like to thank her friends, UnityPoint Hospice, and the Mayflower Community, for their support in making her final days peaceful.

Plans for Sallie's memorial service will be announced. Donations in her memory can be made to the Mayflower Human Need Fund. The Mayflower Community in Grinnell is an affordable senior living and healthcare organization that provides home and support to its residents. Earnings are used to help residents who are unable to pay the full cost of their healthcare. Gifts can be made online at https://www.mayflowerhomes.com/donations/ or Mayflower Homes Foundation, 616 Broad Street, Grinnell IA 50112.