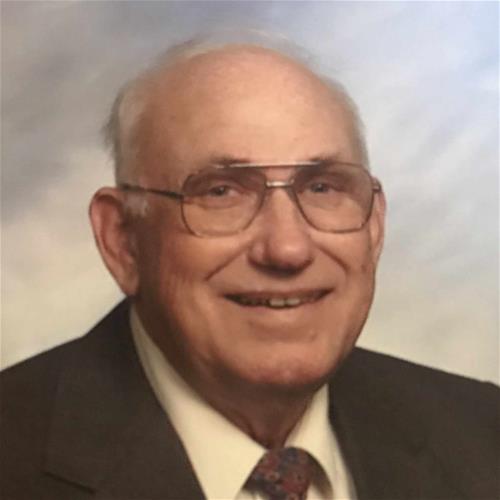 Delbert John Blom. 95, was born on February 16, 1927, to Harry H. and Julia (Meyer) Blom of Alexander, Iowa.  He was welcomed home by two older sisters, Beulah, and Clara Mae.  He grew up on the family farm south of Alexander and graduated from Alexander Consolidated High School in 1944.  For several years he farmed west of Latimer, which was up the road from where he was raised.  After leaving the farm and running a retail business in Sheffield, he moved to Grundy Center where he worked for Moorman Feed Company in several capacities.  After retiring from Moorman Feed, he then assisted area farmers with their spring planting and fall harvest.

Delbert was a faithful member of the American Lutheran Church of Grundy Center which was a very important part of his life.  He developed a stronger faith and was dedicated to the work of the Lord in this Church.  Every visit to the Care Center by Pastor Thoreson and friends was enjoyed.

Delbert enjoyed traveling during the winter months to warm areas of the country. He loved family get-togethers and attending family events. During the years, he attended several family reunions in different areas of Iowa and surrounding states.  He could converse with anyone and developed many friendships over the years.  It was an especially good time when friends and neighbors would come and visit by stopping by his house and Parkview Manor in Reinbeck, Iowa after moving there in August 2015.

He was preceded in death by two daughters Pamela Luiken and Cheryl Berger, his parents, his two sisters Beulah Blom and Clara Mae Hopkey, a brother-in-law LaVern Hopkey, and son-in-law Larry Luiken.

The family would like to thank Parkview Manor in Reinbeck, Iowa for providing wonderful care to Delbert the last seven years.  He was blessed to have his cousin, Glen Hansen, and family, who assisted him in many ways.

Memorial services will be at 11:00 a.m. on May 17, 2022, at the American Lutheran Church in Grundy Center with Pastor Luther Thoreson officiating. Interment of ashes will be in the Coulter, Iowa Cemetery.