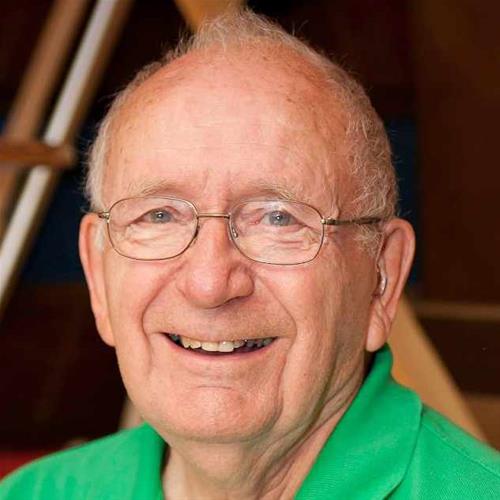 Harry Alexander Olsen, Jr., 91, a resident of Davenport passed away on October 10, 2021.  A memorial service will be held Saturday, October 16, 2021, at 11:00 a.m. at St. Paul Lutheran Church, Davenport.  A lunch will follow the service. Family will greet friends prior to the service beginning at 10:00 a.m. Cremated remains will be interred in the Memorial Garden of St. Paul church.

He began work as a draftsman at Western Electric but was shortly after drafted into the United States Army in August 1952.  After basic training he was posted to Kaiserslautern, German where he served until honorable discharge in August 1954.  Shortly before his discharge he was given leave to visit relatives in Egersund, Norway from which his grandparents had earlier immigrated to the U.S.  While visiting he met a young woman, Kari Arnesen, to whom he proposed marriage after six days of courtship.  His proposal accepted, they were married upon his separation from the Army in September 1954, a union that lasted 55 years until Kari’s death in 2009.

Returning to U.S. with his young bride, Harry resumed his employment with Western Electric, and began a family with the birth of his sons Olaf, followed by Arnold, then daughter Lisa, and son Erik.  Harry never truly retired: he never could sit still for long.  After taking an early retirement from Western Electric in the late ‘70s, he worked briefly in real estate and then worked several years for the Salt Creek School District (Villa Park, IL), in maintenance.  He also served for a time as a teacher’s aide for students with profound disabilities at Villa Park’s Willowbrook High School, the job he said was his favorite of all.  He also did house painting contract work for several years and side jobs building and roofing from time to time.

Harry’s “love language” was “Acts of Service” which he performed in many ways for family and community alike. His volunteer efforts were prodigious over the decades.  He had leadership roles with the celebration of the nation’s bicentennial for Villa Park, IL including involvement in securing for a museum the old railroad depot there.  He was active in civic clubs such as the Optimists and later the VFW.  Especially dear to his heart were the several churches he served in various capacities, sharing his handiness with building, carpentry, painting, and facility design.  He loved using his skills to serve his children as they married and had families, painting, repairing, laying floor tiles, hanging shelves and pictures for their homes.  Intrigued by his daughter’s long-arm quilting machine, he also tried quilting as a hobby, making several for family and friends.

In 2006, Harry and Kari moved to the Quad Cities to be near their daughter and grandchildren who had relocated there.
When his wife Kari experienced the ravages of diabetes, Harry dedicated his life to caring for her, first with thrice-weekly trips to her dialysis before she received a kidney transplant.  And then, after her leg amputations, he partnered in her fierce desire to continue living a full life by driving her to parks, cultural events, grandchildren’s sports events, and countless errands and doctors’ appointments.

After his wife’s passing, Harry spent most weekdays serving innumerable hours as a volunteer on Davenport’s St. Paul Lutheran Church maintenance crew where he continued to paint, do carpentry, and serve the church and pre-school with whatever work needed to be done.

When asked what advice he had for those who wished to live a long, vigorous life like him, Harry said “Don’t sit down!”  He rarely did, except to watch a baseball game, which was a favorite pastime in his later years.

Harry is survived by his children Olaf (Debbie) Olsen of Plymouth, MN: Arnold (the late Cynthia) Olsen of Troy, IL; Lisa (Lee) Gaston of Davenport, and Erik (Winona) of St. Louis, MO; and also by his grandchildren Todd (Jess) Olsen of Stillwater, MN; Ryan Olsen of Wheaton IL; Dana (Tom) Haynes of Troy, IL; Eleanor Gaston of Davenport, Nathaniel Gaston of Portland, OR; Genevieve Gaston of Iowa City; and Sage Olsen of St. Louis, MO., and six great-grandchildren.  Also beloved by Harry were his nieces and nephews and sister-in-law.  Besides his wife, Harry was predeceased by his parents and his brother Richard.

Memorial contributions in Harry’s honor may be made to St. Paul Lutheran Church or Edwards United Church of Christ, both of Davenport, IA.