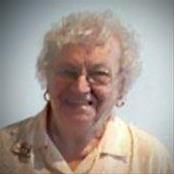 Mary A. Powers, 81, of Charles City, passed away Saturday, May 29th at her home after a fight with cancer.

She was preceded in death by her husband Roger Powers; a son Michael Powers; parents Earl and Anna Lutzow; three sisters Ruthie Gibbons, Virginia Hammer, and Patricia Hammons, and a brother Charles Lutzow.

Mary enjoyed spending time with her family and knitting.  She will be greatly missed.

A celebration of life is being arranged by the family and will take place at a later date. Her ashes will be entombed with that of her husbands, and kept in the care of her daughter.
<< Back to listing
Share this page:
Share This