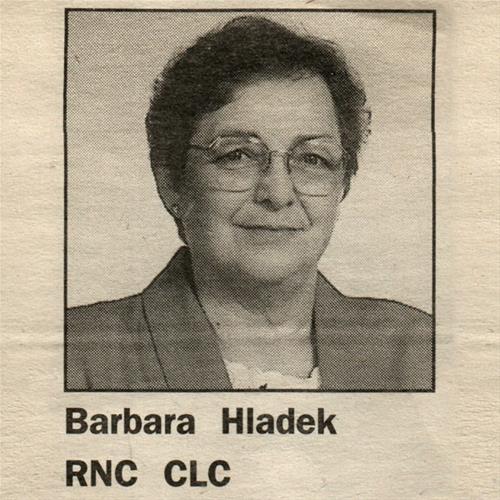 Barbara Ellen Hladek, 82, of Cedar Rapids, IA, peacefully went to be with the Lord on Friday, January 29 after a valiant battle with Lewy Body dementia and diabetes. Daughter of the late Florence Ellen Bean and Herman Jay Bean, Barbara was born January 27, 1939 in Mount Vernon, Iowa.

Barbara attended Mount Vernon High School where she participated in speech association, theater, four years in band, major in vocal music, graduating 1957. . Barbara married Douglas Allan Hladek April 15, 1961 and was blessed with two children. Besides being a wonderful mother, Barbara was an avid gardener, talented artist, and a wonderful cook. She loved nature, especially birds, flowers, blue skies and sunsets and was a dedicated fan of the Chicago Cubs and Willie Nelson. A love for travel took Barbara and her family to many wonderful destinations. Barbara attended Kirkwood Community College where she earned first her LPN and then while working full time, went back to earn her R.N. She was a dedicated, hard-working, and caring nurse for 28 years and took loving care of every mother and baby over those years.

Arrangements are being handled through Cedar Memorial in Cedar Rapids. No formal services are being schedule, at this time, as per Barbara’s wishes. Her family will likely plan an informal celebration of life, at a later date.

In lieu of flowers, please consider donations to the Cedar Valley Humane Society or Meals on Wheels.

We would like to extend our sincere appreciation to Dr. Bell and Renee Grummer-Miller of the Palliative Care team at St. Luke’s hospital, the staff at Winslow House Care Center and the hospice team at Care Initiatives.

“My last. I am gone, but remember as you knew me. “
<< Back to listing
Share this page:
Share This