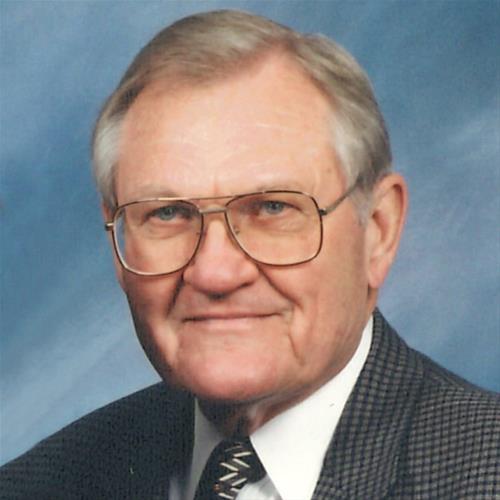 Herman “Lou” Schroedel passed away on September 7, at BRIO in Johnston after a long struggle with Lewy’s Body Dementia. We miss him but are rejoicing because he is now at his home in heaven. Lou was born March 31, 1931, to Louie and Esther (Salzman) Schroedel at Triumph, Minnesota.

Lou married his best friend’s sister, Hazel Anderson, in 1953. Lou graduated from Sherburn High School and Gustavus Adolphus College. After two years in college he enlisted in the Navy/Air Division. After boot camp he attended jet mechanics training and got his first duty assignment. He was an aviation mechanic on a maintenance crew with the Blue Angels. After two years with the Angels he spent the last year of his enlistment aboard the USS Wasp with a fighter squadron.

Lou was a wonderful father, grandfather, and husband. He enjoyed fishing, pheasant hunting in earlier years and world-wide travel. He was a good cook and a handyman. He was a member of Gloria Dei Lutheran Church, Golden K Kiwanis, V.F.W. and the American Legion.

We sincerely wish to thank the staff at Elan Cottage Brio for their kind and loving care of Lou.

On Thursday, September 17, 2020, there will be a family memorial service at Gloria Dei Lutheran Church followed by a Committal at Iowa Veterans Cemetery.

Donations may be directed to Gloria Dei Lutheran Church or Animal Rescue League of Des Moines, Iowa.
<< Back to listing
Share this page:
Share This