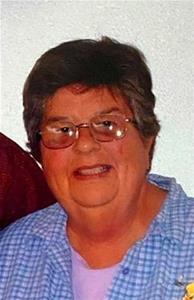 Joan Owens Wolford was born on November 3rd, 1939 in Washington, Iowa to Doris and Albert Owens.  She died of natural causes May 13th at the age of 80.

Joan grew up in Columbus Junction and graduated from Columbus Community High School in 1957.  On October 26, 1957 she married Clifford Wolford in Lone Tree.  The couple made their home in Buffalo where they raised four children before moving to the Wolford family farm in Davis City in 1978. Joan remained on the farm until Cliff’s death in 2012 before moving to Martensdale to be closer to family and later Windsor Manor in Indianola.

Joan was a school bus driver for 34 years for the Princeton and Central Decatur school districts.  She loved listening to gospel and country music and enjoyed playing her organ as well.  Joan loved playing cards and spending time with her family.  She had a great sense of humor and was always making others laugh.

Joan was preceded in death by her husband, Cliff; and parents, Albert and Doris Owens.