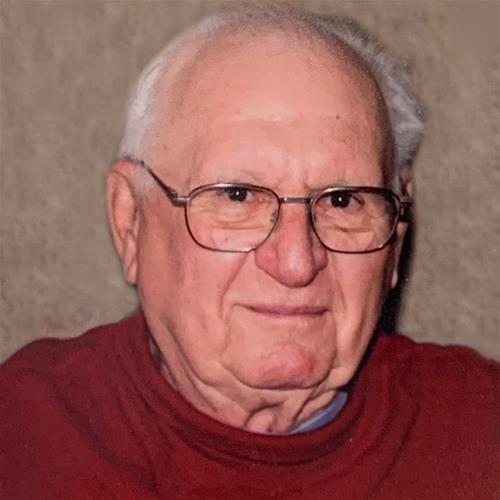 Warren, the first of two sons to Fred E. and Doris (Espenette) Wetherill, was born on August 30, 1925 in Chilhowee, Missouri.  His family moved from Missouri to Minneapolis, MN.  As a young man he was devoted to Boy Scouts.  During his high school years the family moved to St. Peter, MN where he graduated from St. Peter High School on May 26, 1943.  After high school he worked for Nicollet Hybrid Seed Company until December 1943 when he began serving his country .  He was inducted into the Army starting boot camp in January 1944.  He was promptly issued the Company Bugle, based on his previous years of playing a horn, and held that position while overseas.    Shortly afterward he was shipped out for 18 months of service in the Philippines, stationed on Mindoro, Mindanao, Salmar and Leyte Islands.  He served in the anti aircraft artillery of the 31rst Marine Corps. Division on Mindanao.     Warren received the Bronze Arrowhead Medal for participating in the Invasion of the Southern Philippines.

After returning from WWII in April of 1946, he enrolled at the University of Minnesota on the GI bill to take Agriculture classes per his father’s wishes rather than fulfill his dreams of teaching.  He met Marjorie Wagner at the University and after a two-year courtship they married on March 12, 1949. Soon they welcomed sons David and Charlie and daughters Ann and Rebecca.

Warren graduated from the Minnesota School of Business with an Advertising and Sales Certificate in 1951.   In the early 1960’s he returned to college to enter into the ministry study and attended the University of Dubuque while working to support a wife and 4 young children.  Often times he worked two jobs to keep the family solvent.  Eventually it became too difficult to meet all obligations and he put the ministry study aside and never returned.

Over the years he had little extra but always shared whatever he could.  He worked hard to make his family’s first home is Dubuque, Iowa (a 100+ yr. old home) more livable.  Early in 1960 he welcomed his father-in-law into their home when he needed to be looked after.  He also rented their second level apartment to families in need rather than the best candidate.

Warren spent 4 years managing Grain Elevators in Western Minnesota and Iowa; 14 years as a Courier for Purolator; 20 years as a Grain Elevator Inspector.  His career working in the grain and farm industry took him to a variety of small towns spread between Minnesota, Michigan, Illinois and Iowa.  After retiring, he eventually landed in McGregor where he met Joyce.  Warren and M. Joyce Davies married on October 22, 2011.

Warren had a love for the outdoors, geodes, the Mississippi River and telling stories to all.  Warren would share his knowledge of Geodes with rock lovers and students whenever there was an opportunity.  He would keep a log of tugs moving barges up and down the Mississippi River.

Warren was preceded in death by wife Marjorie and daughter Rebecca (Tom) Rodriquez.

The Family would like to thank the St. Croix Hospice Staff for their outstanding care and compassion.

Memorials can be directed to the St. Croix Hospice and The First Congregational Church of McGregor.

According to Warren’s wishes, there will be no formal funeral service.  A celebration of life will be planned for a later date.