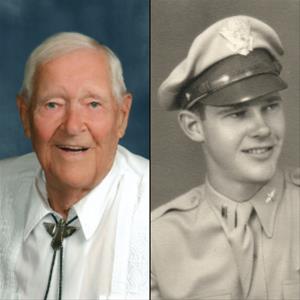 Edward Louis Brokens, age 98, of Monticello, passed from this life on October 1, 2019 after a brief illness.   A Memorial Service celebrating Ed’s life will be held Saturday, October 12 at 11:00 with Rev. Ed Moreano officiating at the United Church of Monticello, 123 N Chestnut St, Monticello, IA.  Family will greet friends beginning at 9:30. Graveside service with military honors will follow at Oakwood Cemetery in Monticello.  Iowa Cremation is caring for Edward and his family.

Edward was born on December 11, 1920 to William and Anna (Balster) Brokens.  He was baptized at St. John Lutheran Church and confirmed at St. Matthew Lutheran Church, where he was a lifelong member.   Ed first attended Scotch Grove Center School near his family’s farm.  When they moved to town, he attended school in Monticello, graduating with the Class of 1938.  He married Velda Rickels on October 13, 1944 at Wayne Zion Lutheran Church and enjoyed seventy-two years with the love of his life.   Ed proudly served his country as a 1st Lieutenant in the Army Air Corps during WWII.  He was a B-24 pilot in the Pacific and was awarded 5 medals for his service.   He participated in an Honor Flight to Washington DC in 2009 and was overwhelmed by the gratitude bestowed on him.

Following the war, the couple resided in Monticello where he built his homes from the ground up.  The family moved to rural Scotch Grove where he farmed several years before moving back to town.  Ed was a hardworking man, jack of all trades, and could fix anything.   Always busy over the years, he had a variety of occupations:  a painting business, partnership in a Dodge dealership, insurance agent with Farm Bureau, and later owned B & E Insurance.   Ed enjoyed travel, camping, gardening, dancing, woodworking, and baking.  He was well known for his apple pies and desserts he made at Pennington Square, and loved tending the raised gardens to provide fresh produce for the residents.   He was a member of the American Legion Post 209.

Ed always had a smile on his face and a sparkle in his blue eyes that will be greatly missed.   Most of all, he was and will always be our hero and role model.  His dedication to Family, God and Country is a legacy he leaves us.

In lieu of flowers memorials may be directed to the Veterans’ Perspective, Quilts of Valor, Honor Flight, or Wounded Warriors in Edward’s name.