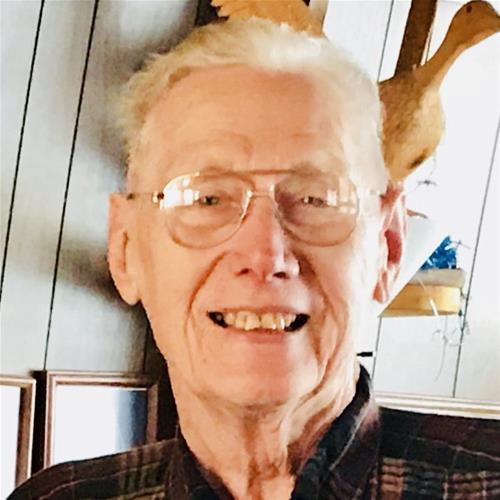 Owen was born February 1, 1933 in Stockton, California and moved to Wisconsin in 1945.  He later moved to Sparta, WI where he married Dorothy Ann Yahnke on May 21, 1960. The couple eventually moved to Lansing, IA where he designed and built their family home.

Owen got his GED in 1974 and an Honorary Engineering Degree from his Interstate Power co-workers in 1994.  In his work life he was a farmer, Army Korean War Veteran, mechanic, and worked in maintenance.   He worked at Clark Transport, Northern Engraving in both Sparta and Lansing, and retired from Interstate Power Plant in Lansing, IA on February 1, 1995. He was a jack of all trades and loved hunting, fishing, card playing, wood cutting, inventing, and being with family & friends. He was always ready to tell a joke or a story.

Owen was preceded in death by his parents Allan and Hazel; infant sister Louise, brother Donald, and half siblings Alan and Edith.

A Memorial Service will be held at Our Saviors Lutheran Church in Lansing, IA on Sunday, November 17, 2019 with visitation from 1-3pm.  Service will start at 3:00 pm with military honors.  Inurnment will be at a later date.

The family would like to thank all the staff from the Crossing River Hospice team, and for their love, support and tender care given to Owen.
<< Back to listing
Share this page:
Share This