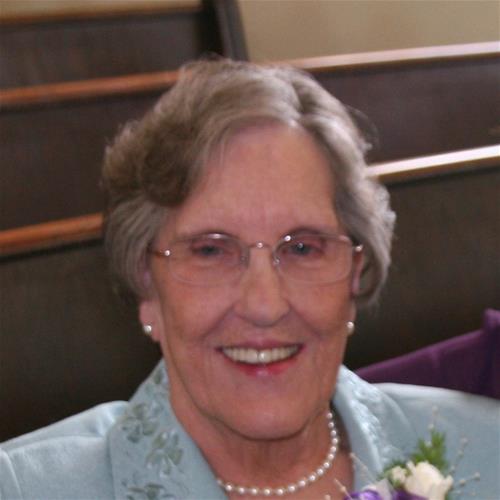 Edith Lorriane (Haats) TerHark was born  February 14, 1935 at the home of her parents in Aplington.  She was the daughter of Edward and Kathryn Haats.

She graduated from Aplington High School in 1953.  She and Fred were married on August 21, 1953 at the Little Brown Church in Nashua.  They had two daughter s Rhonda and Deb.  They made their home on the family farm south of Aplington.  She was a busy farm wife and homemaker helping with the crops and dairy.  They owned TerHark Salvage and retired in 1995 when they moved to Sleepy Hollow west of Aplington.

Edee and Fred traveled all over the United States either on the motorcycle or by Amtrack.  They also traveled abroad.

Edee enjoyed sewing, quilting, cake decorating, ceramics and decorating her home.  She was a huge Hawkeye Fan especially enjoying football.  She was a faithful member of the First Reformed Church in Aplington.  Her life was grounded in her faith.

The greatest joy was her grandchildren and great-grandchildren.   Even during her final days on earth they would put a smile on her face.

She is proceeded in death by her husband Fred, her brothers  Albert, Ted and Calvin Haats, sister Gertrude Kramer and Cathryn Elliott and grandson-in-law Chris Morris.

She left those who loved her on April 18, 2019 to be with the Lord.  The best gift she could give her husband was to greet him there on his birthday.  She died peacefully under the care of the staff at Maple Manor and Compassus Hospice.

Funeral Services will be held  on Wednesday April 24, 2019 at 3 pm at the First Reformed Church in Aplington.  There will be a time for fellowship and food following the service until 6 pm.

In lieu of flowers memorials can be directed towards the family and will be used to support the church missionaries and KNWS.