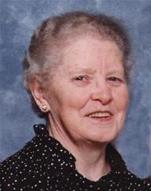 Betty J. Brewer, 76 of 310 Pine Street, Lamont, Iowa died Thursday morning, June 20, 2002 at Mercy Medical Center in Cedar Rapids following a long illness. Services will be held in Lamont, Iowa. Private family inurnment will be in Madison Cemetery near Lamont. Betty is survived by her husband, Laverne of Lamont, Iowa, a daughter, Linda Burgess and husband Bill of Cedar Rapids, three sons, William Morris Brewer and wife Denise of Rockford, Illinois, Terry Brewer and wife Vicki of Freeport, Illinois and Randy Brewer and wife Kandi of Arlington, Iowa, two brothers, Laverne Nielsen of Oelwein, Iowa and Dean Nielsen of Kentucky and a sister Carole Hart of Waterloo, Iowa. 14 grandchildren and 2 great grandchildren. She was preceded in death by a son Keith James Brewer in 1991, a daughter Karen Jean Brewer in 1947 and several brothers and sisters. Betty was born April 15, 1926, the daughter of Morris and Minnie (Karsten) Nielsen. She graduated from Lamont High School in 1944. She married Laverne Brewer on May 19, 1945 in Independence, Iowa. Betty taught school at the rural Winthrop School in 1945. She was a member of Fairbank Baptist Church and Lamont Baptist Church where she also served as secretary/treasurer for a number of years. Betty worked as a cook at Starmont High School for 10 years. Betty always took great pride in her children. She was a hardworking homemaker who loved vegetable gardening and canning.
<< Back to listing
Share this page:
Share This