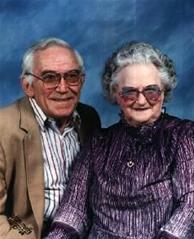 Lucien Clifford King, 80, of 619 Monroe Street, Muscatine, Iowa died Thursday morning, April 25, 2002 at the University of Iowa Hospitals and Clinics following a very short illness. Services will be held Saturday May 4 at 10:30 A.M. at the First Christian Church with Rev. Suz McIver officiating. Friends may call at First Christian Church on Kindler Ave after 10:00 a.m. on Saturday. Memorial donations may be made to the family of Lucien King, 2863 Highland Court, Muscatine, Iowa 52761. Lucien is survived by his wife, Geraldine of Muscatine, two sons, Ronald King and wife Tammy and Kenneth King and a daughter Sharon Harmon all of Muscatine. Lucien was preceded in death by a daughter Patricia Tietje and one brother and one sister. Lucien had 9 grandchildren and 6 great grandchildren. Lucien was born April 1, 1922 in Muscatine, the son of Clifford and Viola (DeLap) King. He married Geraldine Malchert on May 24, 1941 in Des Moines, Iowa. He work as an inspector for US Government at the Rock Island Arsenal for 30 years. He served his county during World War II as a medical technician in the Army. Arrangements by the Cremation Society of Eastern Iowa.
<< Back to listing
Share this page:
Share This